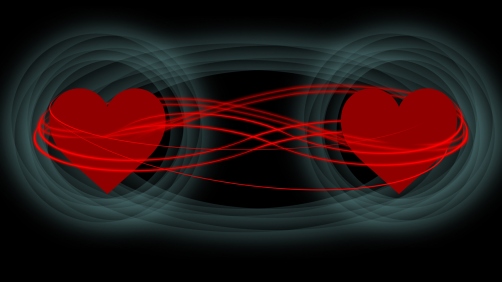 Quantum Entanglement has been demonstrated by physicists. The Big Bang is a theory, but generally agreed upon by physicists. The unproven idea that entanglement extends its effects beyond the sub-atomic to the macroscopic world and is fundamental to the universe has been discussed by some scientists. This post serves merely to present one of a vast number of opinions… concerning the nature of our universe.

Two Particles are said to be entangled when the measurement state of one allows for the state of the other to be known. Einstein called it “Spooky-Action-At-A-Distance”. This phenomenon is independent of distance. Particles as a result of their collision or interaction, may become entangled by a mechanism as yet not understood and then act as if one particle. Essentially at a distance there is no transference of information between them…they become one particle for all intent and purposes. Physical properties such as position, momentum, spin, polarization, energy, and time have been proven in the lab to be correlated among entangled particles. Knowing the characteristic of one particle allows instant knowledge of the other… even across a vast distance. This phenomenon was predicted by The Quantum Theory and has been proven by experimentation with distances in the kilometers to date.

The seemingly limitless ability of the human imagination and that of the study of mathematics have led to many theories about our world, some of which were only much later proven to be correct. Due to the very nature of entanglement creating the interdependency of all things in the universe, scientists are able to predict by drawing inference from their discoveries and hence to extrapolate and formulate new theories in turn, which are initially unable to be proven by experiment. Simply by knowing the characteristics of one thing another thing can be inferred due to their relationship or interdependency. This is the beauty of entanglement.

At the time of the Big Bang, entanglement could be said to have provided the mechanism where by sub-atomic particles at the quantum level were created and further became differentially associated as simple atoms which in turn served as the primordial building blocks in the creation of the universe. As such building blocks in our world are so prevalent it would stand to reason that entanglement does not abruptly end at the quantum level but that it extends to the macroscopic world as a mechanism governing all interactions in the universe.

Erwin Schrodinger, one of the early advocates of Quantum Theory, and who also coined the name “entanglement” said the following: “I would not call entanglement one but rather the characteristic trait of quantum mechanics.” Not only does atomic matter become entangled; whole systems may become entangled, too. “Physicists now believe that entanglement between particles exists everywhere, all the time, and have recently found shocking evidence that it affects the wider, ‘macroscopic’ world that we inhabit.”

Entanglement could be described as being “the interdependency of everything” both at a macroscopic level and at a sub-atomic level in our universe. Without its contribution the universe may not have been created. It may be the mortar between the building blocks. It is possible that entanglement creates and connects up the space-time continuum from smaller components which have characteristics vastly different than the observable whole. For example at the quantum level space-time has no meaning. Theoretically, if Quantum Entanglement as proven by experiments can take place between distances in space instantly then it would logically follow that such would be also apply to time as well. This would leave open the intriguing possibility that information could transcend the past, present and future. It may also imply that our world is but a construct of pure consciousness. Matter, time and space would then be described as constructs of consciousness. What would the nature of consciousness be then …a complex and coordinated dynamic arrangement of energy differentially arranged by the process of entanglement… essentially, organized information giving rise to the creation of a multidimensional reality which we in turn experience within a conscious universe.

One thought on “Entanglement: The Key To Understanding The Universe?”